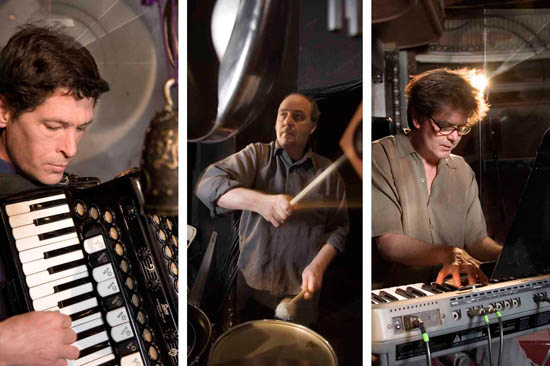 “The best in the world at accompanying silent films.” Roger Ebert

Performing at prestigious film festivals and cultural centers in the US and abroad (The San Francisco Silent Film Festival, The Telluride Film Festival, The Louvre, Lincoln Center, The Academy of Motion Pictures, the National Gallery of Art and others), Alloy has helped revive some of the great masterpieces of the silent era.

An unusual combination of found percussion and state-of-the-art electronics gives the Orchestra the ability to create any sound imaginable.

Utilizing their famous “rack of junk” and electronic synthesizers, the group generates beautiful music in a spectacular variety of styles. They can conjure up a French symphony or a simple German bar band of the 20’s. The group can make the audience think it is being attacked by tigers, contacted by radio signals from Mars or swept up in the Russian Revolution.
–

Alloy Orchestra is (L to R):

December 31, 1991, Boston
On a snow-swept pedestal in the middle of Boston Commons, three musicians gathered together tons of junk metal, found objects, and homemade instruments. The plan was to create some unusual music and to have some fun. Now, 28 years later, Alloy has showcased their musical magic in more than a thousand performances, visited a dozen countries, and in the process has helped revitalize the classic medium of silent film accompaniment.

The Alloy Orchestra began its notorious reign of silent film terror with an original score for Metropolis in 1991 at the Coolidge Corner Theatre (in Brookline MA). In the intervening years, the group has written scores for 32 feature length film presentations, typically premiering their new scores at the Telluride Film Festival in Colorado, the San Francisco Silent film Festival or the New York Film Festival.

Alloy has composed new scores for

In addition to their work with silents, the Orchestra has contributed soundtracks to contemporary films and videos by directors Paolo Cherchi Usai, Errol Morris (Fast, Cheap and Out of Control), Jane Gillooly (Dragonflies, the Baby Cries), Ben Meade (Vakvagny), Shandor Garrison (Freebox) and others.